Saturday was the Democratic caucus in Hawaii.   The printout lists of registered voters were not up-to-date; the volunteers too few, and the lines to cast a single vote were ridiculously long.  At the Kihei polling place where I volunteered, some people waited three hours; some walked away. 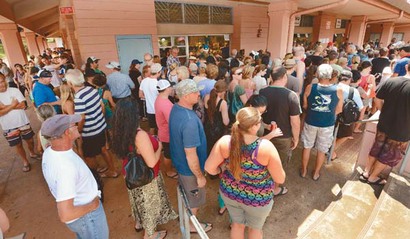 At Lokelani Intermediate School in Kihei, HI – line to vote in the Democratic caucus – from The Maui News -3/27/2016

For the most part, people were wonderful; a Bernie supporter gave us cookies, people chatted with friends, some said it was like a party;  only a few yelled in frustration.  Many were first-time voters – young and old.  Some life-long Republicans said they were voting as Democrats for the first time.

Americans want change.  Many people are struggling, and we know it doesn’t have to be this way.   Bernie won in Hawaii, a historically union and Democratic state!  Thank you to all who came (and waited)  to vote their preference for the Democratic presidential candidate.

It’s now Sunday morning, Easter.  Birds are chirping as it gets light; Barry’s making coffee; later I’ll go to a Quaker service and then gather with family and friends at the beach.  We celebrate and remember Jesus.

As we feel the Christian love of the season, and the hope of real change in the U.S., it’s troubling to know that laws still remain in the U.S. that deny justice to many.

One such law is called the Doctrine of Discovery.  It is based on official papal letters from the 15th century and a concept of public international law expounded by the United States Supreme Court in a series of decisions, most notably Johnson v. M’Intosh in 1823.

“Three papal bulls make up the Doctrine of Discovery, which established the worldview that a certain group of people, Western Christendom, had moral sanction and the support of international law to invade and colonize the lands of non-Christian Peoples, to dominate them, take their possessions and resources, and enslave and kill them.

The doctrine blessed slave trade and genocide.  It yielded a body of international law known as the Law of Nations.  The U.S. embraced these doctrines, creating a constitutional framework for slavery and later segregation, and adapted the Law of Nations as Federal Indian Common Law.

Over the last 150 years, we have seen the repudiation of both slavery and segregation, and the U.S. Constitution has been amended.  Yet Federal Indian Common Law, devoid of human rights principles, remains intact.  It defines Indigenous people as a political entity, giving land titles to Congress and reducing Indigenous property rights to occupancy.  Enforcing concepts of plenary power and unfettered guardianship, rejecting the the relevance of “principles of abstract justice” or the “morality of the case,” it affords remedies to Indians as “a matter of grace, not because of legal liability,” as stated in the Marshall Trilogy, the foundation of federal Indian law.  The Doctrine of Discovery was most recently quoted in a 2005 U.S. Supreme Court Case, City of Sherrill, New York v. Oneida Nation:

Under the ‘doctrine of discovery…’fee title [ownership] to the lands occupied by Indians when the colonists arrived became vested in the sovereign-first the discovering European nation and later the original states and the United States.

Today’s massive human rights violations against Indigenous people are the results of such applications of the Doctrine of Discovery.  Life expectancy for Native people in the U.S. is 48 to 52 years.  Unemployment rates in Indigenous communities run from 45 to 75 percent.  And incarceration rates and suicide rates are higher than in any other racial or ethnic group–as are rates of violence against and murder of Native women and the likelihood of being shot by law enforcement.  [Learn more at afsc.org/dod-legacy].

After examining this information, New England Yearly Meeting [Quakers] decided to embark on a multi-year journey of healing.  Their Meeting Minute of the Doctrine of Discovery states:

We as New England Yearly Meeting repudiate the Doctrine of Discovery. We are beginning a journey to consider the moral and spiritual implications of how we benefit from and have been harmed by the doctrine as individuals and meetings . . . We need to learn more, find ways to seek forgiveness, and to ask how the Spirit might lead us . . . We encourage consultation with Indigenous Peoples to restore the health of ourselves and our planet.  We recognize that this is our work to do.  On this path, respectfully traveled in love, our goal is true healing.

“When Indigenous peoples exercise self-determination, they come in conflict with governments and corporations that rely on the legal lineage of the Doctrine of Christian Discovery to assert claims on natural resources, such as coal, oil, uranium, natural gas, and water. This is one of many lasting effects of the doctrine today.”  From http://afsc.org/resource/legacy-doctrine-discovery

In Hawaii too, we have a mainly unrecognized shame of the overthrow of the Hawaiian government.  On January 17, 1893, U.S. troops took part in a conspiracy led by a small group of wealthy, white businessmen and sugar plantation owners to overthrow the monarchy of Queen Lili’uokalani.

Businessmen behind the overthrow of the Hawaiian government

Most Hawaiians opposed the coup, as did incoming U.S. President Grover Cleveland. 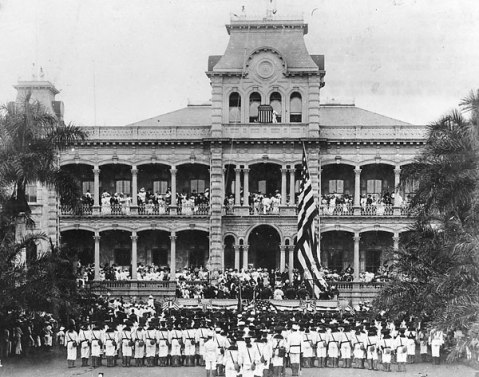 ʻIolani Palace was the royal residence of the rulers of the Kingdom of Hawaii beginning with Kamehameha III under the Kamehameha Dynasty and ending with Queen Liliʻuokalani.

When we act as Jesus would – in love, compassion, and inclusion – He is alive.    There is much to love and many  wrongs to correct.   Consider what Jesus would do – and do it.

P.S. If you are a U.S. citizen,  please volunteer to help at your polling place in November.  We hope you – and everyone – votes.  We need to correct injustices; we want just change.